Dunedin Swim Team is led by a dedicated team of coaches and teachers, with professional training and many years of experience to bring out the best in our swimmers.

Our Head Coach Nick is a UKCC, Level 3 qualified swimming coach and passionate about swimming and the benefits that the sport can bring to people. Nick is a former club competitive swimmer, Water Polo player, and open water swimmer, who still makes time between coaching to swim 4-5 times most weeks of the year. Nick's goal is to produce technically proficient (competitive) swimmers who enjoy their swimming, and will hopefully continue with swimming in some capacity for the rest of their adult life. Nick knows he has succeeded as a coach when we have so many swimmers who are pleased with their achievements, and when we get positive feedback from parents.

John is a UKCC Level 1 Coach and Vice President of the club, with over 10 years of coaching experience. He has supplemented this training with numerous courses at Stirling University on stroke development, which John utilises across our training sessions every week. John first became involved with the club when his daughter was swimming competitively, and John's partner Pauline is also the Club Treasurer. John and Pauline are now the longest serving members. John is also currently our Gala Convener, and looks after the sourcing and supply of swimming kit that we provide to our members. John's main goal for Dunedin is to ensure that we have a competitive and financially stable club so that our swimmers can compete, train and feel happy and secure. John takes great satisfaction when the swimmers do well at the various galas that we attend, and the smiles on the faces of the swimmers make all of the hard work worthwhile.

Stephen is currently the Club President and has been involved with Dunedin for almost 5 years. He enjoys assisting with running our Thursday evening coaching session and occasionally other sessions when called upon. His Firm BCKM Solicitors are proud to have been involved in the sponsorship of the Club over the last few years. Stephen has three children all of whom have been active members as swimmers at Dunedin and his two sons, Andrew and Mathew, continue to swim every week with the Club. Since his association with the club he has enjoyed the whole friendly and dynamic feeling that exists. One of the most significant features, in his view of the Club, is the close interaction between the older and younger swimmers who often swim together in the same session. The confidence this provides to the younger swimmers is noticeable and a motivating factor in the development and growth of the Club.

Martin is swim teacher and holds the UKCC coach levels 1 and 2 qualifications. Martin joined Dunedin Swim Team 12 years ago, and is part of a family who are all heavily involved in swimming and coaching at Dunedin. A former competitive swimmer, Martin was a Scottish national squad member from 1986-90, and swam with California State University Bakersfield NCAA betwen 1988-92, where he trained under USA Olympic coach Ernie Maglischo. Martin enjoys giving back the experiences he have been fortunate enough to have had whilst swimming competitively, not just technique in the pool but the qualities of dedication and commitment that are transferable throughout life, which Martin shares with all at Dunedin during his coaching work. Outside of Dunedin, Martin is a Scotland surf team coach, and runs Momentum Surf School (Dunedin members Tamzin and Owen both instructors and Scotland surf team members). Martin is a RNLI Lifeguard trainer assessor, Swim Safe coordinator, and volunteers for Surf charity The Wave Project as club coach and instructor. Martin even makes custom surfboards when time allows!

Tamzin is a student at Queen Margaret University Edinburgh, studying Physical Activity, and gained her Level 1 swim teaching qualification in 2016 and recently achieved the SSTQ Level 2 swim teaching qualification. Tamzin has been a member of Dunedin Swim Team since 2007, starting as a swimmer and now involved in coaching. She thoroughly enjoys watching swimmers progress with their swimming and improve on little aspects that they’ve worked hard on. Tamzin likes to give back her positive experiences with the club to the younger swimmers who are moving up to competing. Out with Dunedin, Tamzin works part time for a swimming company, teaching young children how to swim. She is a member of the Scottish Surf Team, and was selected to compete for Scotland in the World Junior Surfing Championships in the Azores in 2016. Tamzin has also represented Scotland in the woman’s section in the British Cup in Newquay in 2019. Tamzin is also a surf instructor, and helps to run Momentum Surf School with her Dad whenever she can.

In addition to our coaching and swim teaching team, Dunedin Swim Team is lucky to have a network of parents and supporters of the club who help to run and manage the club behind the scenes, organise and run our annual swim gala, provide poolside assistance at training and competitions, provide timekeeping, judging and other technical official duties. We are always looking for more help and encourage you to get in touch if you would like to help. Just a few of these contributors are shown below: 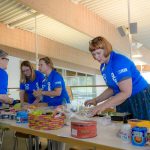 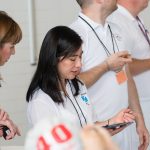 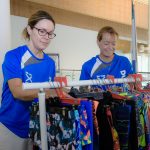 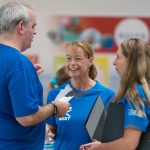 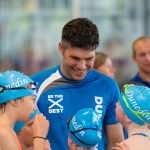 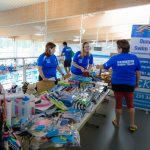 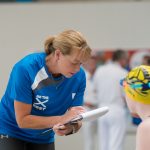 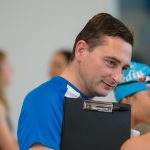